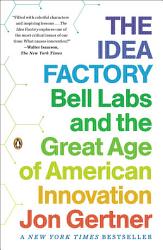 Book Description
Highlights achievements of Bell Labs as a leading innovator, exploring the role of its highly educated employees in developing new technologies while considering the qualities of companies where innovation and development are most successful. 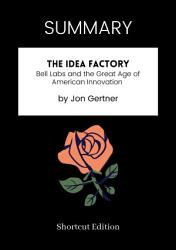 Book Description
* Our summary is short, simple and pragmatic. It allows you to have the essential ideas of a big book in less than 30 minutes. In this summary, you'll learn all about the origins of modern communications by delving into the history of Bell Laboratories. You'll understand how innovation comes about through the collaboration of ingenious and creative minds. You will also realize that : the success of a company depends above all on the vision of the people who make it up; intellectual curiosity and audacity are two virtues that bring creativity; technological innovations are based on collective and interdisciplinary work; bell laboratories have above all worked to reenchant science. Founded in 1925, Bell Laboratories was created to develop the R&D (research and development) of American Telephone & Telegraph (AT&T), which then held a monopoly in the telecommunications sector. The goal was to create a system capable of connecting two people wherever they were and whatever the time of day. Today, this is not only the case, but it is also possible to exchange images and different types of data. Tens of thousands of scientists have succeeded one another, over several decades, to bring this vision to life. The Idea Factory, traces the lives of some of them: Mervin Kelly, Jim Fisk, William Shockley, Claude Shannon, John R. Pierce. All are bound by the faith they put into the mission of Bell Laboratories. *Buy now the summary of this book for the modest price of a cup of coffee! 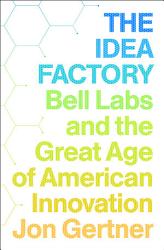 Book Description
The definitive history of America’s greatest incubator of innovation and the birthplace of some of the 20th century’s most influential technologies From its beginnings in the 1920s until its demise in the 1980s, Bell Labs-officially, the research and development wing of AT&T-was the biggest, and arguably the best, laboratory for new ideas in the world. From the transistor to the laser, from digital communications to cellular telephony, it's hard to find an aspect of modern life that hasn't been touched by Bell Labs. In The Idea Factory, Jon Gertner traces the origins of some of the twentieth century's most important inventions and delivers a riveting and heretofore untold chapter of American history. At its heart this is a story about the life and work of a small group of brilliant and eccentric men-Mervin Kelly, Bill Shockley, Claude Shannon, John Pierce, and Bill Baker-who spent their careers at Bell Labs. Today, when the drive to invent has become a mantra, Bell Labs offers us a way to enrich our understanding of the challenges and solutions to technological innovation. Here, after all, was where the foundational ideas on the management of innovation were born. 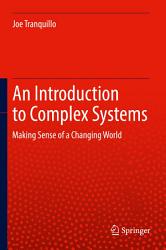 Book Description
This book explores the interdisciplinary field of complex systems theory. By the end of the book, readers will be able to understand terminology that is used in complex systems and how they are related to one another; see the patterns of complex systems in practical examples; map current topics, in a variety of fields, to complexity theory; and be able to read more advanced literature in the field. The book begins with basic systems concepts and moves on to how these simple rules can lead to complex behavior. The author then introduces non-linear systems, followed by pattern formation, and networks and information flow in systems. Later chapters cover the thermodynamics of complex systems, dynamical patterns that arise in networks, and how game theory can serve as a framework for decision making. The text is interspersed with both philosophical and quantitative arguments, and each chapter ends with questions and prompts that help readers make more connections. 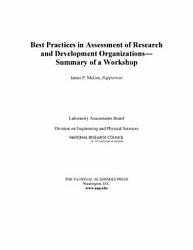 Book Description
The National Institute of Standards and Technology (NIST)--recognizing that information and insights gained through continual examination of practices for organizational assessment are useful for decision makers at organizations across the deferral, industrial, academic, and national laboratory sectors-recently requested that the National Research Council (NRC) organize a panel to review best practices in assessment of research and development (R&D) organizations. In response, the NRC established the Panel for Review of Best Practices in Assessment of Research and Development Organizations. The panel was charged to consider means of assessing the following in a manner that satisfies the requirements of NIST to perform effective assessments but also identifies assessment methods that can be applied selectively to other R&D organizations. These methods include: technical merit and quality of the science and engineering work, the adequacy of the resources available to support high-quality work, the effectiveness of the agency's delivery of the services and products required to fulfill its goals, the degree to which the agency's current and planned R&D portfolio supports its mission, as well as the agency's flexibility to respond to changing economic, political, social and technological contexts. As one means of data gathering, among others that the panel is performing toward development of a final report of its findings, the panel organized a planning committee for a workshop on best practices in assessment of R&D organizations. Best Practices in Assessment of Research and Development Organizations: Summary of a Workshop reviews the workshop conducted at the Keck Center of the National Academies in Washington, D.C., on March 19, 2012. 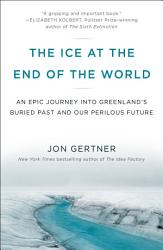 Book Description
A riveting, urgent account of the explorers and scientists racing to understand the rapidly melting ice sheet in Greenland, a dramatic harbinger of climate change "Jon Gertner takes readers to spots few journalists or even explorers have visited. The result is a gripping and important book."--Elizabeth Kolbert, Pulitzer Prize-winning author of The Sixth Extinction NAMED ONE OF THE BEST BOOKS OF THE YEAR BY The Washington Post * The Christian Science Monitor * Library Journal Greenland: a remote, mysterious island five times the size of California but with a population of just 56,000. The ice sheet that covers it is 700 miles wide and 1,500 miles long, and is composed of nearly three quadrillion tons of ice. For the last 150 years, explorers and scientists have sought to understand Greenland--at first hoping that it would serve as a gateway to the North Pole, and later coming to realize that it contained essential information about our climate. Locked within this vast and frozen white desert are some of the most profound secrets about our planet and its future. Greenland's ice doesn't just tell us where we've been. More urgently, it tells us where we're headed. In The Ice at the End of the World, Jon Gertner explains how Greenland has evolved from one of earth's last frontiers to its largest scientific laboratory. The history of Greenland's ice begins with the explorers who arrived here at the turn of the twentieth century--first on foot, then on skis, then on crude, motorized sleds--and embarked on grueling expeditions that took as long as a year and often ended in frostbitten tragedy. Their original goal was simple: to conquer Greenland's seemingly infinite interior. Yet their efforts eventually gave way to scientists who built lonely encampments out on the ice and began drilling--one mile, two miles down. Their aim was to pull up ice cores that could reveal the deepest mysteries of earth's past, going back hundreds of thousands of years. Today, scientists from all over the world are deploying every technological tool available to uncover the secrets of this frozen island before it's too late. As Greenland's ice melts and runs off into the sea, it not only threatens to affect hundreds of millions of people who live in coastal areas. It will also have drastic effects on ocean currents, weather systems, economies, and migration patterns. Gertner chronicles the unfathomable hardships, amazing discoveries, and scientific achievements of the Arctic's explorers and researchers with a transporting, deeply intelligent style--and a keen sense of what this work means for the rest of us. The melting ice sheet in Greenland is, in a way, an analog for time. It contains the past. It reflects the present. It can also tell us how much time we might have left. 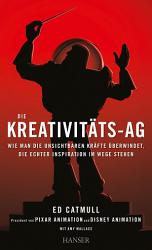 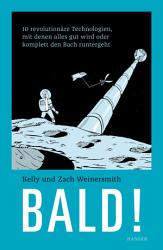 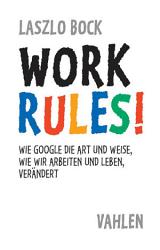 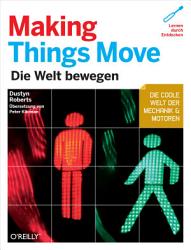